This 700-sq. ft. bunker in the two videos above has been available at our builder's facility as a demo model for the last several months.
Serious inquiries only: customerservice@safecastle.com

Our Saferoom Gets BLASTED! 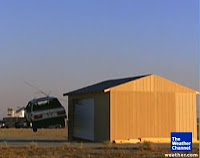 The Weather Channel got a hold of one of our builder's saferooms for some heavy-duty abuse in the name of dramatic TV science. It was actually pretty cool stuff.

The program was called "Weather Proof," and has aired repeatedly.

The "abuse" is documented in two stages ...

1. Our builder anchored the saferoom to
the ground as it is 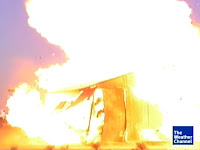 normally installed. The show's producers acquired a rocket car and anchored that to the ground several yards away. The afterburners were fired up and produced a blast of wind exceeding 300mph. Boom! See the clip here.

2. Then, a garage was built up around the saferoom. In an effort to simulate a worst-case scenario, a car was hurled into and through the front of the garage, into the side of the saferoom, igniting an intense natural-gas explosion and fire. Boom! Here's that clip.

After all was said and done, the total damage to the saferoom, which is constructed the same as our shelters and saferooms--a few scorch marks on the outside of the shelter from the explosion and fire!